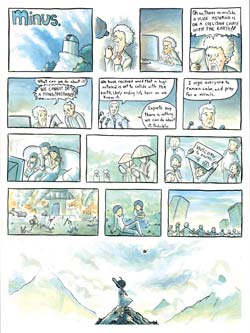 The comic can be divided in two sets of panels, the first group describes that there is a huge asteroid set to collide with the Earth, and that experts say there’s nothing anyone can do about it. The second group shows how different types of people react to this news. Of particular interest is the last panel showing a girl with a baseball bat ready to hit the asteroid and send it away from Earth.

The first time I read this comic, I had not read any other minus. comics before and knew nothing about who minus was. The way I interpreted the last panel was that she was just a naïve kid who refused to believe that there was nothing to do to avoid the collision and decided that since no one was doing anything about it, she should take the matter into her own hands. To her, fending off the asteroid seemed as simple as grabbing a baseball bat and hitting the asteroid off course. To me, this seemed like a really nice way to showcase different reactions people might have to this type of news and to illustrate how some people refuse to go out down without a fight, even if everyone else has already given up.

But then, I started reading the rest of the minus. comics. I quickly realized that minus was capable of doing some pretty magical things, thus making my first interpretation of this comic no longer “right”. She is not naïvely thinking that she can use a baseball bat to hit the asteroid away from earth, she can actually do just that. She is no longer trying to do something against all odds, now she’s just saving the world. Even with this interpretation I still like the comic a lot, and in fact I’m glad I decided to read the rest of the minus. comics since most of them are really good. But I’m sticking to my original interpretation because I think it’s much better.

I find it quite interesting that I liked the comic more when I didn’t have the full context than when I did. It makes me wonder if I would have liked more the rest of the comics if I had seen those first. Or if I’ve been going around life missing really cool interpretations of things just because I look at them within certain context.

8 thoughts on “The Power of Context”